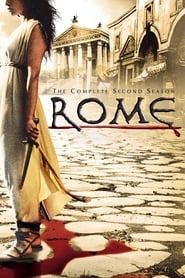 Season two’s storyline picks up right where season one left off: with the 44 B.C. assassination of Gaius Julius Caesar and the near-simultaneous death of Niobe, wife of Caesar’s faithful bodyguard Lucius Vorenus. Diverted from his post after learning that Lucius, his assumed grandson, was in fact Niobe’s illegitimate son, Vorenus now descends into near-madness over his failure to protect Caesar, his role in his spouse’s death, and the rumored murder of his estranged daughters.