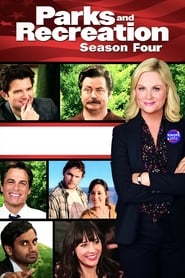 The fourth season of Parks and Recreation originally aired in the United States on the NBC television network, and began on September 22, 2011.

As with past seasons, it focused on Leslie Knope and her staff at the parks and recreation department of the fictional Indiana town of Pawnee. However, this season featured an overarching story arc, beginning in the first episode and culminating in the finale, where Leslie ran for the city council of Pawnee.