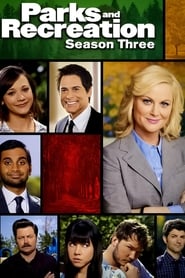 The third season of Parks and Recreation originally aired in the United States on the NBC television network between January 20 and May 19, 2011. Like the previous seasons, it focused on Leslie Knope and her staff at the parks and recreation department of the fictional Indiana town of Pawnee. The season featured 16 episodes, most of which were approximately 22 minutes long each and aired at 9:30 p.m. on Thursdays.

All of the members of the original cast returned for the third season except Paul Schneider, who previously played city planner Mark Brendanawicz. Rob Lowe and Adam Scott, who appeared as guest stars in the second season, began season three as regular cast members playing Chris Traeger and Ben Wyatt, respectively. The season also featured guest appearances by Megan Mullally, Will Forte and Parker Posey, among others.

To accommodate Amy Poehler’s pregnancy, the first six episodes of the third season were filmed immediately after season two wrapped so they could be saved for a projected September 2010 air date. However, after the episodes were finished, NBC postponed the season premiere until January to accommodate their new series, Outsourced. The third season consisted of several major story arcs, including a complete shutdown of the Pawnee government for budgetary reasons, inspired by the real-life global financial crisis. Other storylines included the parks department’s organization of a harvest festival, a romance between Leslie and Ben, and the dating and eventual marriage of Andy Dwyer and April Ludgate.