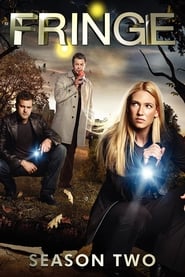 The second season of the American science fiction television series Fringe commenced airing on the Fox network on September 17, 2009, and concluded on May 20, 2010. The season was produced by Bad Robot Productions in association with Warner Bros. Television, and its showrunners were Jeff Pinkner and J.H. Wyman. Actors Anna Torv, John Noble, and Joshua Jackson reprised their roles as FBI agent Olivia Dunham and father-son duo Peter and Walter Bishop. Previous series regulars Lance Reddick, Jasika Nicole, Blair Brown, and Kirk Acevedo also returned, though with Acevedo in a limited capacity.

The season followed the continuation of a war between two universes, the prime and the parallel. It was set in the former, until the last several episodes when Peter Bishop journeyed back to the parallel universe after being lured there by his real father, “Walternate”. While co-creator J.J. Abrams described the first season as “identifying that there is an enemy”, he referred to season two as “getting to know the enemy” as it “build[s] to a very specific type of confrontation” between the two universes. The writers focused on their characters’ development, in particular making them more comfortable with each other while solving cases for Fringe Division. By inventing the “mythalone” style of episode, the producers sought to create the perfect episode that mixed standalone episode qualities for casual viewers with the further development of the series’ mythology for regular viewers.