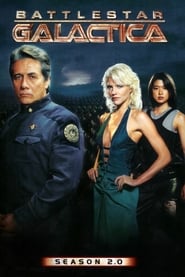 The second season of the reimagined science fiction television series Battlestar Galactica premiered on the Sci-Fi Channel in the United States on July 25, 2005, and concluded on March 10, 2006. The season was split into two parts, each containing 10 episodes. “Season 2.0” aired from July to September 2005, and “Season 2.5” aired from January to March 2006.